ARMY The shooting took place during the changing of the guard, said the army in a statement 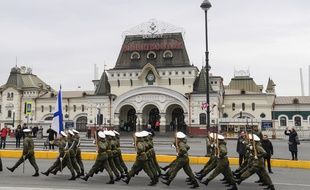 Eight soldiers were killed on Friday in a shooting by a Russian soldier at a base in Eastern Siberia. According to the Russian army, quoted by state media, two other Russians were wounded, but their lives are no longer in danger.

“The soldier who opened fire was arrested,” says the army statement quoted by Russian agencies. According to this source, the tragedy occurred during the changeover of a guard on a base in the Chita region, north of the Chinese and Mongolian border.

A “nervous breakdown”
“Initial findings on the ground indicate that this member’s actions may be related to a nervous breakdown of a personal nature and are not related to his military obligations,” the statement added. The two injured were hospitalized and their lives are not in danger, the source said.

The Russian army has indicated that a meeting will soon be held at the base, in the presence of a Deputy Minister of Defence, Andrei Kartapolov. Contacted by AFP, a Russian army spokesman did not wish to make any comments. In Russia, military service, lasting one year, is of a sad reputation. Cases of violent hazing are regularly reported, despite a significant improvement in the situation in recent years.